I woke up in the middle of the night with the sudden realization that “Holy shit. I’m going to Egypt. Tomorrow.” My heart fluttered a little.

Hours later I was on my way to the airport with my backpack and my wife.

I forgot my sunglasses. 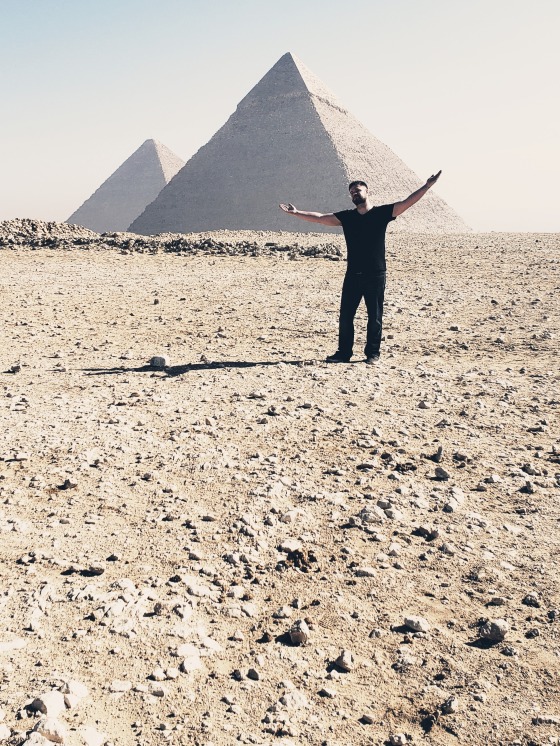 When was the moment that you realized who you are, what you love or what you’re supposed to do with your life?

In my life, I’ve experienced many of these moments, from being arrested and realizing that getting fucked up everyday wasn’t the life I wanted to the road trip to the Rocky Mountains with my friends where I found my passion for travel.  Both of these moments caused a fundamental shift in my thinking and instantly changed the direction of my life.

When I was arrested, I promised myself that I’d do whatever it took to get myself clean, even if it meant losing every friend I had and starting over from scratch, which is exactly what happened.  The road trip gave me a chance to see the world beyond the limits of my small Midwestern town and after that trip, I saw life from a different perspective and a new way of thinking.

And while I didn’t realize it at the time, my hike to the top of Half Dome in Yosemite National Park also helped define who I am today.  I’ve been reminiscing about that trip in my mind, thinking about the beauty of the park, the challenge of the climb and the triumph of reaching the top.  The sore knees and the other pains have long since faded and now I’m left with only fond memories.

I want to go back.

Thinking about everything I want to accomplish this year and the amount of time I have to do it, it’s time to start prioritizing.  Turkey, Russia, Ethiopia, Japan, New England, Yosemite are all on the radar this year but I only have a few weeks in which I can dedicate myself to travel due to summer classes.

When I travel, I’m visiting huge cities like Paris, Rome or Buenos Aires and spend a lot of my time riding subways, taking taxis and breathing exhaust.  I long for the solitude of the forests and the thrill of climbing mountains.  There’s something special about a bear and her cub walking next to you in the wild, about getting your boots dusty and the feeling of a cool mountain river to soothe your body after a long hike.

So, while I might not be wandering around the bazaars of Istanbul or doing hand stands in Red Square this year, maybe I’ll return to my favorite place on the planet instead.

The other day on the Hundred Goals Facebook Page I asked “What can you buy for two dollars?”  It didn’t take long for some really interesting (and admittedly strange) responses to start coming in.  Tony from Venezuela says he “can’t buy shit” in his country for two dollars.  Isaac can park his car for two hours in the metered parking on campus and two dollars will pay for Sheena’s ATM fees for withdrawing cash from her bank account.

It seems that our feelings for two dollars isn’t much different from two cents…in other words, pretty worthless.  On its own, two dollars really isn’t much.  Maybe it’d get you a couple of McDonald’s cheeseburgers or a few minutes on a payphone but you probably won’t get very much more than that.  You can’t even get a Starbucks coffee for less than two dollars!

If two dollars is such a measly sum, how can anyone possibly travel the world on that kind of money?

In the book The Art of Non-Conformity, Chris Guillebeau points out on page 194 that you can get to almost anywhere in the world for two dollars a day:

Seeing it like that makes it look like a pretty impressive amount of money, doesn’t it?  And all you thought two dollars could get you was nothing.  But the question now is, can $1,460 really get you anywhere in the world?  In my experience, yes.  I’ve never paid that much for a plane ticket, so you’ll probably even have money left over to pay for other expenses like a room and the cost of food while you are there.  Okay, it’s probably true that getting to Bora Bora might cost a little more, but in all honesty, not that much more.  To get there in two years, just save a little more each day or save a little while longer.

Maybe you can’t afford to be a world traveler at this point in your life but that doesn’t mean you can’t see the world.  Saving even a small amount of money each day will eventually get you to anywhere you want to be.  Egypt, Japan, Italy, Brazil, Alaska, Russia…anywhere you can imagine.

The next time you think two dollars can’t buy you anything, or that the ATM fee isn’t a big deal, think about what you might be missing out on.  Change your perspective about those two dollars and give your money its value again.  Just imagine yourself wandering around the ancient cities in Greece or riding through the Serengeti on safari and adjust your spending habits accordingly.

Think of your money in terms of how it will bring you closer to accomplishing your goal.  Ask yourself, “What can two dollars buy me in France?”  The answer might be “Not much!” but wouldn’t you rather spend your two dollars in France than wherever you are now?  I don’t know about you, but it always seems just a little better sipping on a soda halfway around the world than it does on the couch in my living room.