The base of the Incline sits at 6,600 feet and the trail climbs 2,000 feet in about 0.88 miles. Sections of the trail have exposed pipe from the days when the Incline was a hydroelectric utility system. Hiking the trail should not be undertaken by the physically unfit, as there is no vehicle access to the trail and anyone injured or suffering a medical emergency will have to walk or be carried down by other hikers.

This was a last minute decision.

I didn’t want to do it alone. I hate doing things alone.

I had just spent the last few days in Colorado Springs hanging out at the Garden of the Gods, climbing the red sandstone fin known as Montezuma’s Tower. That climb was easy physically but a bit nerve racking balancing on the edge of a rock that’s maybe a couple of feet wide with 100 foot drop on either side.

I was less intimidated doing that than I was by hiking straight up the side of a mountain. Aside from the fact that I’d be doing it alone, I had my doubts that I could even do it. I didn’t want to be the guy who quit 3/4 of the way to the top. At least if I didn’t do it, I could still claim I could. But if I tried and failed, well … I failed.

It was down to the last minutes of the trip. Either I was going to do it or I wasn’t.

“It’s not even a mile.” I kept telling myself. Even if it was horrible, it would be over soon enough. I could tough it out for a mile.

I cranked my music and started hiking.

It didn’t take long before I realized just how difficult it would actually be. I thought I was in pretty good shape but I felt like my lungs were on fire. Maybe you’ve had the feeling before, where your heart hurts and your lungs burn. It’s shit.

But I kept on going until I reached the bailout point. I stopped to take a break, looking up, looking down and then looking at the trail to the bottom. Nope. I wasn’t going to quit. Not now. Even if I had to crawl the last 100 yards to the top, I would reach the top.

I might have crawled a little but I finally made it to the top. I sat there for a few minutes feeling satisfied with myself. There really isn’t a lot of glory in doing these kinds of things. Or, if there is, it isn’t long lasting. Which is okay. I’d done what I set out to do and I could go home with my pride in tact.

And now that I’ve done it once, I’ll probably do it every time I’m out that way. It just seems like the logical thing to do. I don’t have any rituals so maybe this is one I could start. 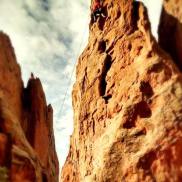 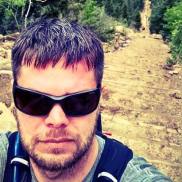 What's on Your Mind? Cancel reply